Trumpet player Marco Blaauw, member of the Musikfabrik ensemble and renowned for his work with Karlheinz Stockhausen, will give a solo performance featuring a double bell instrument that was especially made for him. He will perform pieces that Rebecca Saunders and Yannis Kyriakides wrote for him, as well as his own composition deathangel in which he plays a conch shell and a ram’s horn.

Blaauw named the concert Inkling after a composition by Dai Fujikura, who was inspired by the way clouds continually change shape and can grow into breathtaking configurations. He will also play Rebecca Saunders’ White, a colour that to her view can espress heat and anger, but also utter brilliance and fragility. Playing his trumpet Blaauw coaxes veils of sound from the unmuted strings of a grand piano. Liza Lim took a text by the philosopher Walter Benjamin about a drawing by Paul Klee of an angel-like figure as the starting point of Wild Winged One. Benjamin’s words, written in 1940, foreshadow inescapable horrors. Liza Lim envisages the angel witnessing these with a mixture of revulsion and sympathy, and translates this inner contradiction in her music. 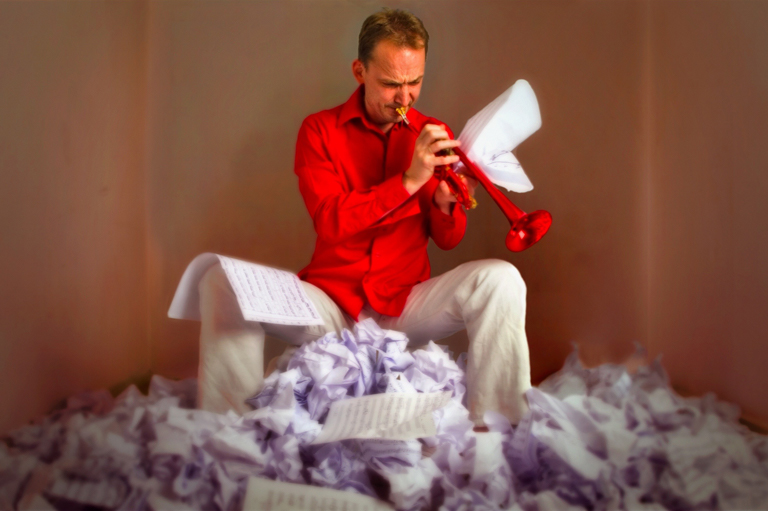 The concert by Marco Blaauw, recorded at the Ensemble Musikfabrik studio in Keulen. A unique experience from your own chair!

You can also watch the video via our YouTube channel..

We offer this concert for free. A donation is highly appreciated. With a contribution you support De Link as well as the musicians and composers we represent.

Yes, I will make a donation!